Chatting with a Dolphin 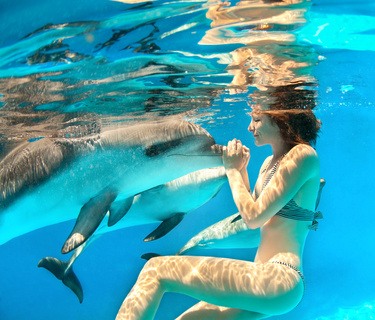 A Brief History of Communication with Dolphins

Humans have been communicating with dolphins since the 1960s through the use of pictures, sounds, key words, and simple phrases. We have learned that dolphins are capable of distinguishing up to 100 different words. However, the communication thus far has been one-way. We teach the dolphin the word or phrase and what it means, and they respond the way we want them to. Dolphins currently have very little or no capability of communicating their thoughts to us in order to elicit the same responses.

The Cetaccean Hearing and Telemetry project being undertaken by the Wild Dolphin Project and the Georgia Institute of Technology in Atlanta seeks to create a two-way dialogue between humans and dolphins. If they succeed in their goal, humans will eventually be capable of carrying on a conversation with dolphins in their own language. But this certainly is a challenging goal.

The first challenge to this technology is going to be to decipher the language of dolphins - this just may prove to be the biggest challenge of all. We don’t even know if the language of dolphins operates on the same principles as human language. Human languages contain words which are strung together to create sentences and complete thoughts, however there is nothing to say that dolphin language will work in the same manner.

Dolphins produce sounds at frequencies up to 200 kilohertz - much higher than humans are capable of hearing. Dolphins can also shift pitch and stretch a sound out over a long period of time. In order to attempt to learn the dolphin language, the researchers are using a pattern detector to analyze the dolphin’s sounds for patterns and other interesting similarities.

If they are capable of deciphering the language of dolphins, and are able to begin to build a database of dolphin vocabulary, the next challenge is going to be in using that information to communication with the dolphins.

The prototype that is currently in development would allow a person to wear a device that contains a small computer about the size of a smart phone, hydrophones capable of hearing the dolphin sounds underwater, and an input device such as a keyboard. This device would pick up the sounds of the dolphins; translate it to the person who would in turn be able to respond using the keyboard. The response would then be translated into the language of dolphins, and then transmitted so that the dolphin can hear it.

If this project is successful, the potential interactions between man and dolphins will become almost limitless. Who knows what dolphins might be able to teach us about the world?

We are proud to announce that our agency has been awarded with not one, but two of the prestigious FinancesOnline awards. One Hour Translation scored

Blog
Oct 4, 2016 · 3 min
International Translation Day, And Some Great Writers You Can Only Read in Translation - Part 1

The translation industry is a relatively small one but it’s also a highly competitive one. Basically, do your research on a translation agency prior to making initial contact and it will certainly pay off; perhaps not immediately because there may not be any work available at the time, so just be patient. Your application must stand out above the rest, and by following these simple steps you should have no problem whatsoever in achieving your translation goals.